This was my first year taking part in Movember. For those that don’t know Movember is an organization that asks men to grow moustaches in order to raise awareness and funds for men’s health.

I was excited that they included mental health and wanted to use the power of my moustache to see if I could get guys to open up about their emotions. Stereotypes of men lead a lot of people to believe they just don’t talk about feelings. Well, my moustache must have had some magic in it, because I found a lot of guys willing to share.

The five most common conversations I had this month:

When I asked men why they felt it was hard to talk about emotions, one of the first answers I got was that no one in their family did. This was a pattern that some guys have proudly broken.

On a cross-country flight, a gentleman in his late 40s shared, “I saw what suppressing emotions did to my dad. He was isolated and didn’t know how to react in certain situations. When I had my kids I wanted to change that. I wanted to show them it was okay to cry and talk to me. At first my dad was against this, but eventually he started to open up about emotions I hadn’t heard him talk about my entire life.”

I do a lot of work with men of all ages. On high school and college campuses numerous guys told me stories about their friends having depression, substance abuse issues or anger control problems. Every person who approached me talked about how much they loved their friend and how worried they are about what he is doing. They were looking for resources or steps to help him. Sometimes it’s easier for guys to talk about their friends’ problems than it is for them to talk about what they’re experiencing.

Guys seem to need a level of permission and safety to open up. In most of my conversations with men I learned that if the dialogue didn’t reference my own emotions then they would seldom open up on their own. Those convos went something like this.

Random guy: “Nice moustache.”
Me: “Oh, I grew it for Movember to raise awareness for men’s health and mental health. You know, because dudes don’t talk about this kind of stuff.”
Random guy: “Okay. Yeah that’s true.”

However, in the times I flipped the script a little and went into detail about growing my moustache because I have a history of bipolar disorder, depression and alcohol abuse, then men would open up with their own stories.

I asked a lot of guys if they are cool with crying. Most said they were, but only in certain situations. A wedding, the birth of a kid, a funeral and if their favorite team won or lost. They said they only felt comfortable crying in front of people that they were close to and would go out of their way to not cry in public or other situations.

One of the most beautiful stories about crying came from an 81-year-old man. He told me, “I cry every day and I don’t care who knows about it. I’ve seen so much in my life. At my age you don’t really care what people think about men crying.”

5. Not wanting to seek help… for anything:

It’s the whole reason Movember was created. Dudes just don’t seem to seek help. This is probably one of the biggest frustrations I hear about men. Whether it’s asking for directions when we’re lost or going to the doctor for the pain in our back that we complain about endlessly or wanting to change the trajectory of a job we’ve been miserable in for years… we would rather go at it alone.

I’m largely guilty of this. At times I’d rather incorrectly diagnose myself on the internet than go to a doctor. I’m stubborn and don’t take the most heartfelt advice from anyone. When I was in Botswana in the Peace Corps, I justified intestinal bacteria that caused me to lose 35 pounds in two months by consistently saying it would go away soon. I didn’t seek help, until I stepped on a scale and saw that I weighed the same as I did in ninth grade.

This month has taught me to be more proactive, more careful about my decisions and more open to the advice of the people who care about me. It helped me build more bridges in conversation to have more men open up in everyday situations. Movember has shown me that I’m not alone. 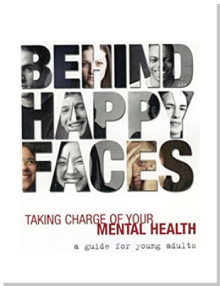 FREE Chapter of "Behind Happy Faces"